The ‘History of Nigeria can be traced to settlers trading across the middle East and Africa as early as 1100 BC. Numerous ancient African civilizations settled in the region that is known today as Nigeria, such as the Kingdom of Nri, the Benin Empire, and the Oyo Empire. Islam reached Nigeria through the Borno Empire between (1068 AD) and Hausa States around (1385 AD) during the 11th century,[1][2][3][4] while Christianity came to Nigeria in the 15th century through Augustinian and Capuchin monks from Portugal. The Songhai Empire also occupied part of the region.[5] From the 15th century, European slave traders arrived in the region to purchase enslaved Africans as part of the Atlantic slave trade, which started in the region of modern-day Nigeria; the first Nigerian port used by European slave traders was Badagry, a coastal harbour.[6][7] Local merchants provided them with slaves, escalating conflicts among the ethnic groups in the region and disrupting older trade patterns through the Trans-Saharan route.[8]

Lagos was occupied by British forces in 1851 and formally annexed by Britain in the year 1865.[9] Nigeria became a British protectorate in 1901. The period of British rule lasted until 1960, when an independence movement led to the country being granted independence.[10] Nigeria first became a republic in 1963, but succumbed to military rule three years later, after a bloody coup d’état. A separatist movement later formed the Republic of Biafra in 1967, leading to the three-year Nigerian Civil War.[11] Nigeria became a republic once again after a new constitution was written in 1979. However, the republic was short-lived, as the military seized power again and ruled for ten years. A new republic was planned to be established in 1993, but was aborted by General Sani Abacha. Abacha died in 1998 and a fourth republic was later established the following year, which ended three decades of intermittent military rule.[12][13] 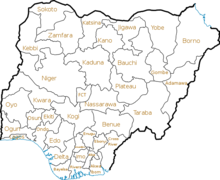