History of woman  is the study of the role that woman have played in history and the method requir  to do so.

It includes the study of the history of the growth of woman’s right throughout recorded history personal achievement over a period of time, the examination of individual and groups of women of historical significance, and the effect that historical events have had on women. I 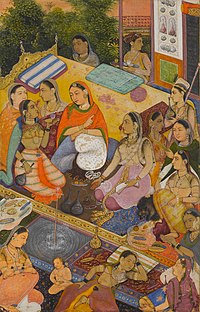 “A Gathering of Court Women”

The main centers of scholarship have been the United States and Britain, where second wave feminist historians, influenced by the new approaches promoted by social history, led the way. As activists in woman libration discussing and analyzing the oppression and inequalities they experienced as women,History was written mainly by men and about men’s activities in the public sphere, especially in Africa—war, politics, diplomacy and administration. Women are usually excluded and, when mentioned, are usually portrayed in sex stereotypical roles such as wives, mothers, daughters, and mistresses. The study of history is value laden in regard to what is considered historically “worthy. Other aspects of this area of study are the differences in women’s lives caused by race, economic status, social status, and various other aspects of society The social aspect of clothing have revolved around traditions regarding certain items of clothing intrinsically suited different gender roles In different periods, both women’s and men’s fashions have highlighted one area or another of the body for attention.

In particular, the wearing of skirts and trousers has given rise to common phrases expressing implied restrictions in use and disapproval of offending behavior.

For example, ancient Greeks often considered the wearing of trousers by Persian men as a sign of an effeminate attitude.